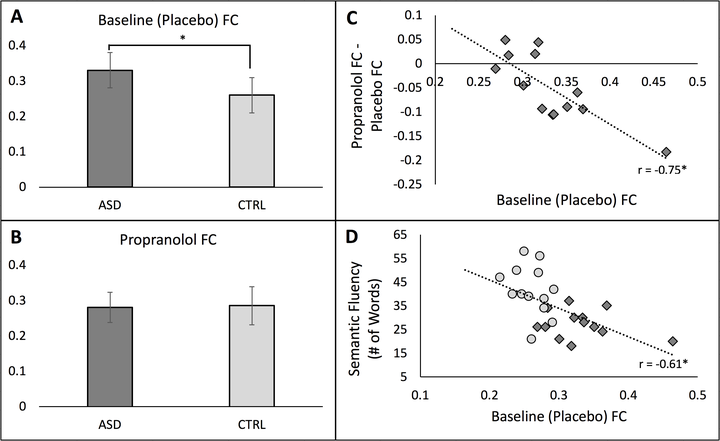 Beta-adrenergic antagonism (e.g., propranolol) has been associated with cognitive/behavioral benefits following stress-induced impairments and for some cognitive/behavioral domains in individuals with autism spectrum disorder (ASD). In this preliminary investigation, we examined whether the benefits of propranolol are associated with functional properties in the brain. Adolescents/adults (mean age=22.54) with (n=13) and without ASD (n=13) attended three sessions in which propranolol, nadolol (beta-adrenergic antagonist that does not cross the blood-brain barrier), or placebo were administered before a semantic fluency task during fMRI. Autonomic nervous system (ANS) measures and functional connectivity between language/associative processing regions and within the fronto-parietal control (FPC), dorsal attention (DAN), and default mode (DMN) networks were examined. Propranolol was associated with improved semantic fluency performance, which was correlated with baseline resting heartrate. Propranolol also altered network efficiency of regions associated with semantic processing and in an exploratory analysis reduced functional differences in the FPC in individuals with ASD. Thus, the cognitive benefits from beta-adrenergic antagonism may be generally associated with improved information processing in the brain in domain-specific networks, but individuals with ASD may also benefit from additional improvements in domain-general networks. The benefits from propranolol may also be able to be predicted from baseline ANS measures, which warrants further investigation.