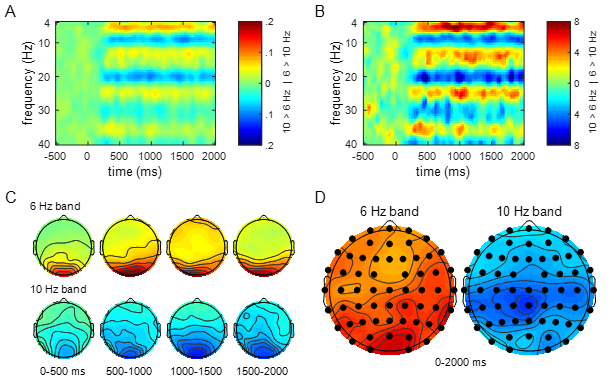 Several fMRI and EEG studies have demonstrated that successful episodic retrieval is accompanied by the reactivation of cortical regions that were active during encoding. These findings are consistent with influential models of episodic memory that posit that conscious retrieval (recollection) relies on hippocampally-mediated cortical reinstatement. Evidence of reactivation corresponding to episodic information that is beyond conscious awareness at the time of memory retrieval, however, is limited. A recent exception is from an EEG study by Wimber, Maaβ, Staudigl, Richardson-Klavehn, and Hanslmayr et al. (2009) in which words were encoded in the context of highly salient visual flicker entrainment and then presented at retrieval in the absence of any flicker. In that study, coherent (phase-locked) neural activity was observed at the corresponding entrained frequencies during retrieval, consistent with the notion that encoding representations were reactivated. Given the important implications of unconscious reactivation to past findings and the modeling literature, the current study set out to provide a direct replication of the previous study. Additionally, an attempt was made to extend such findings to intentional retrieval by acquiring EEG while subjects were explicitly asked to make memory judgments about the flicker frequency from encoding. Throughout a comprehensive set of analyses, the current study consistently failed to demonstrate evidence for unconscious reactivation, and instead provided support that test items were indistinguishable according to their prior encoding context. The findings thus establish an important boundary condition for the involvement of cortical reinstatement in episodic memory.